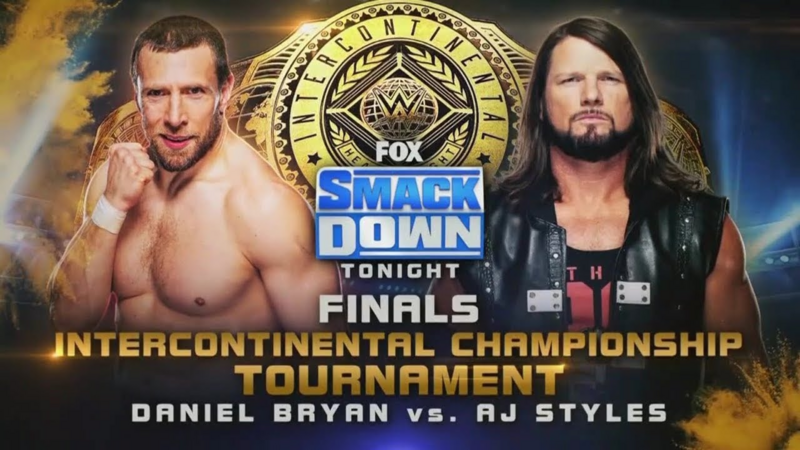 There were actually people who were calling this the greatest Intercontinental Title match ever. I certainly wouldn’t go that far but it was one of the best in recent memory. After Sami Zayn took time away during the pandemic, AJ Styles and Daniel Bryan met in the finals of a tournament to crown a new champion. These two had some disappointing encounters like at Royal Rumble 2019 and some bangers like at TLC 2018 or when Bryan took the WWE Title from Styles. This was one of their better bouts. It had the feel of an epic, lasting 38:06 and feeling like what the “workhorse” championship should be. Two of the best wrestlers in history putting on a stellar match to hold that gold. The battle saw tons of close calls but never really felt like it was going overboard with the idea. A few of the commercial breaks hurt the momentum at times but that’s it. Styles won with the Phenomenal Forearm in a contest that stole the show mere days before THE GREATEST WRESTLING MATCH EVER.” A high point for Styles, who hasn’t had many greats over the past few years. [****¼] 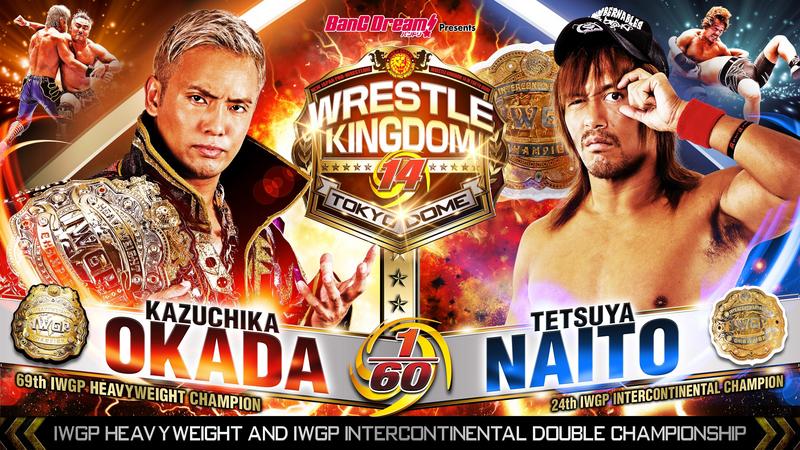 Their 2012 match remains their best (****½). In 2014, they met at WK 8 (***¾) and the G1 (****¼). Naito beat him for the title at Invasion Attack 2016 (****) but Okada regained it at Dominion (****) and ended Naito’s threat as a top guy at WK 12 (***½). I stand by that statement regardless of who takes home both titles. I’ll give you three guesses on how this started? Slowly like all big Okada matches. At least make it interesting and useful. They don’t even do much with Naito’s leg, which was a major storyline in yesterday’s match. He should still be hampered by it here. Once the big spots came, they were notable. Okada landing on his head on a poison rana was rough. I don’t know how these guys do it. Props to Okada for how late he kicked out of an early Destino. I never bought it as the finish because that move never ends a match on the first try but Okada tried his best. I think Naito did a great job in stressing the importance and his desperation. I also dug the callbacks, like Naito busting out the Stardust Press just as he did at WK 12. The knee seemed to come back into play after it though that was inconsistent. Eventually, enough offense capped by another Destino ended this in 35:37. Not an all-time classic but a great main event. I wish the early stuff felt like it meant more rather than come across as filler to kill time so they could go 30. That being said, there were plenty of great callbacks and story elements to make this work a bit better than the night one headliner. [****¼] 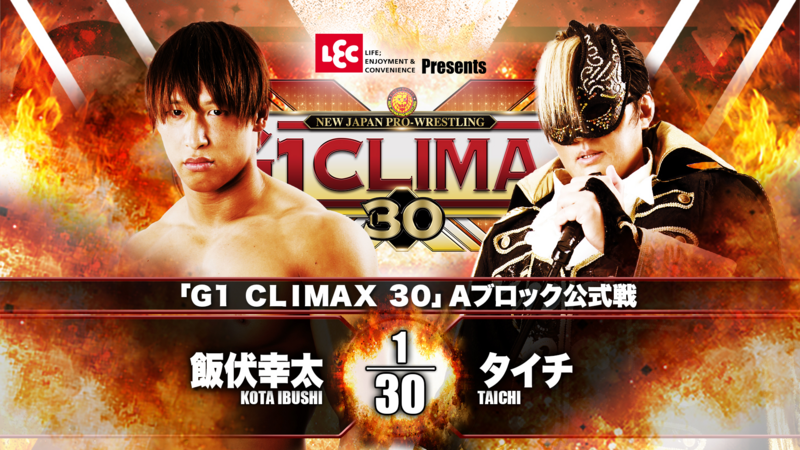 They’ve met twice, splitting them. Ibushi won in the 2009 BOSJ, while Taichi won in this year’s NJC (***½). Ibushi needed to win to stay alive. Taichi went after Ibushi and tried trading kicks with him. You could see that it was hurting him more than Ibushi but he still went after it. Honestly, this went on forever but I actually really enjoyed it. As it went on, Taichi started delivering stronger kicks and he seemed to be really into the idea of proving his toughness. There was a stubbornness to this that I loved. After 15 minutes of kicks, they were stuck holding each other up due to the damage and pain. Finally, after only throwing kicks the entire time, Ibushi won with Kamigoye in 17:12. Outstanding. I’ve watched thousands of matches in my lifetime so it’s rare to give me something that I’ve never seen before and this was that. I loved it. [****¼] 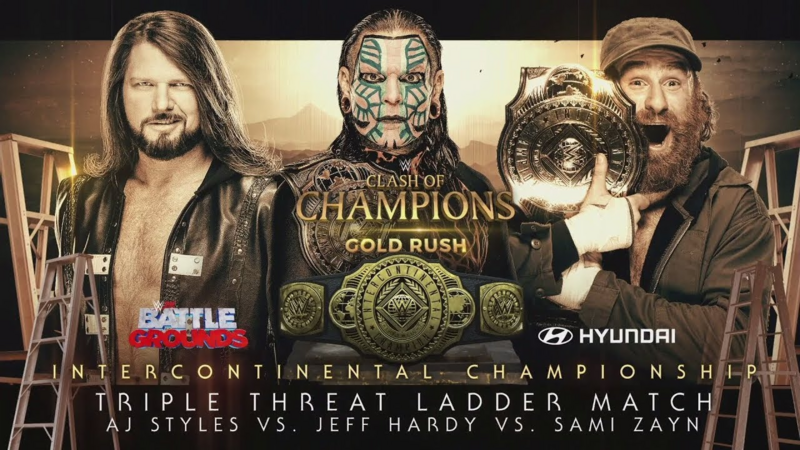 Yes, I put Sami as champion too. They opened with highlights of each man in ladder matches in their careers. A lot of this match had the things you’ve come to expect from WWE ladder matches. Guys were slammed onto ladders in vicious ways to the point where their backs looked brutal. In particular, Sami’s body looked absolutely battered. Jeff took an absurdly rough bump onto an open ladder and I don’t know how he’s still taking those. Jeff hit his signature Swanton Bomb off the ladder and through a table, which makes no sense to be doing at his age. Sami Zayn then used handcuffs on Hardy’s earlobe to trap him on a ladder. That was awesome. Sami also handcuffed himself to AJ to prevent him from climbing. When AJ tried to do so, Jeff climbed in with the ladder still attached to him. While AJ battled him, Sami had the keys to uncuff himself and cuff AJ to the ladder before climbing himself to pull down the titles in 26:42. That was a bit long but it was a ton of fun, had some wild spots, and that finish was INCREDIBLE. It’s so refreshing to see creative and original ladder match spots after all this time. Sami is one of the best ever. [****¼] 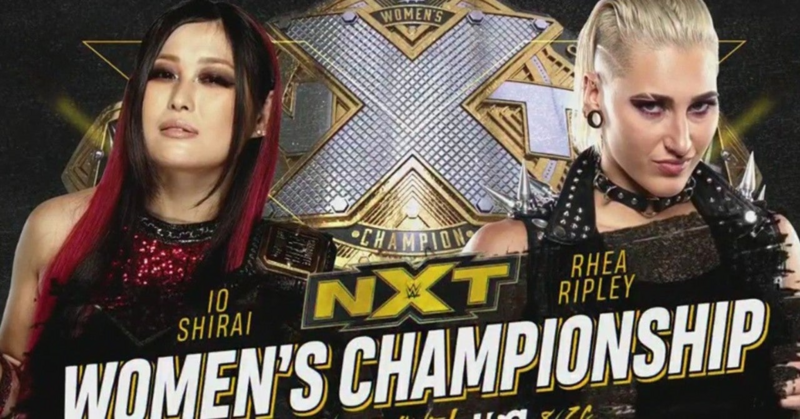 Take the biggest female star of NXT in 2019 and put her against the biggest female star of 2020. It’s a recipe for success. Due to the Charlotte Flair fiasco, fans never got the Io Shirai/Rhea Ripley TakeOver match people wanted. They more than made up for it on this episode of NXT in a huge main event. These two put on an absolute classic, culminating after an incredible 22:06. It was a case where the women felt like the top stars in the entire company. Thankfully, there was no cheap copout finish to protect both stars. Instead, they just gave the fans a fitting conclusion. Io busted out a powerbomb through a table and then delivered a moonsault to retain. That allowed Ripley to look great in defeat and have the champion come out on top. Although Ripley ended up sticking around in NXT, this felt like a swan song of sorts and it would’ve worked wonderfully as that. [****¼] 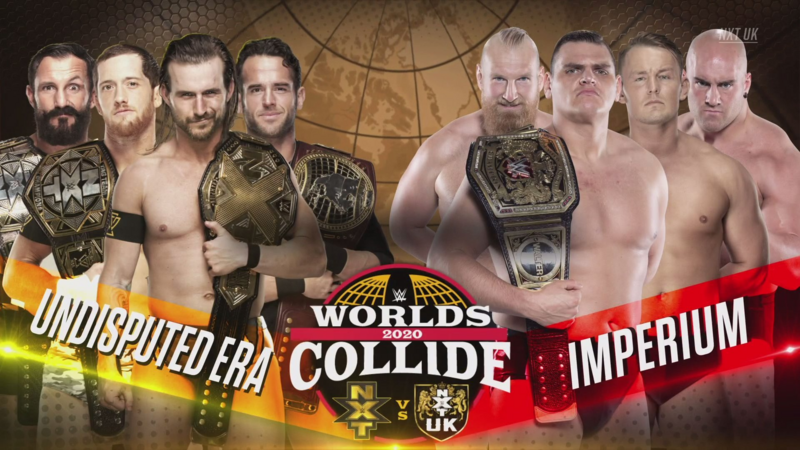 This match felt like a big deal from the start. The crowd was molten. The opening exchanges between Aichner and O’Reilly were pretty great. Alexander Wolfe was the unfortunate one to get hurt. He took a chop/kick combo and seemed to get knocked out. They had to stop the match for a minute and medics checked on him outside. WALTER had to come in and turn the tide because his guys were starting to take a beating. Imperium had the disadvantage so it was cool to see UE use the numbers to their advantage. I loved Roddy standing up to WALTER and going chop for chop with him. If anyone can do it, it’s Roddy. He also stopped a huge WALTER run by giving him an Olympic Slam through the announce table. It looked like all hope was lost for Imperium but WALTER got back on the apron a few minutes later. He was alive and he got the hot tag. CHOPS GALORE! The finishing stretch was great and saw WALTER win out with a powerbomb on O’Reilly in 29:50. That was exquisite. They had to work through an injury in the first five minutes and still put on a banger. I loved how Roddy got to shine and the way that WALTER played a great babyface. [****¼] 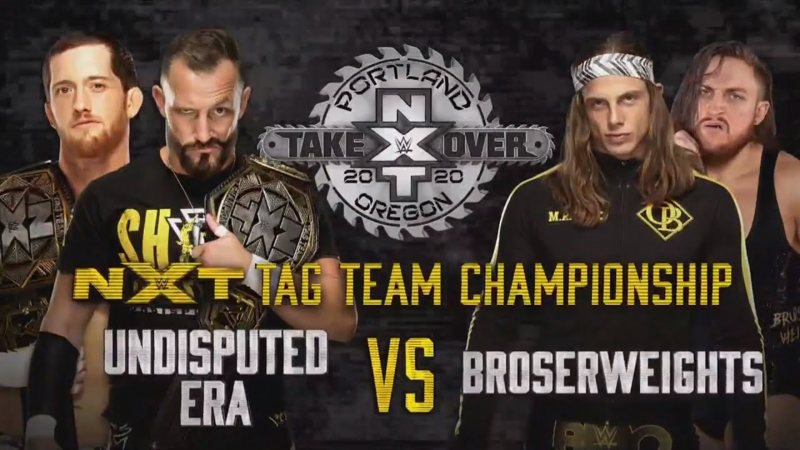 I’ve probably mentioned it already but TakeOver: Portland was the best show of the year from NXT. Honestly, it was probably the show of the year from any promotion. The peak of the event was this NXT Tag Team Title match. Obviously, Matt Riddle has become an undesirable but he was on fire early in the year. Alongside Pete Dunne as the Broserweights, they put on consistently good matches to win the Dusty Rhodes Tag Team Classic. Facing the greatest tag team in NXT history, they put on a clinic. The match was 16:59 of pure tag team excellence. It was teased quite often that Dunne and Riddle would implode but it was done the right amount without over going overboard. They pulled together and dominated in a hot closing stretch to overcome the champions and capture the titles. The Bitter Bro to Sleep was one of the most dynamic tandem finishers I can recall. They never got to have a real reign, but we at least got this banger. [****½] 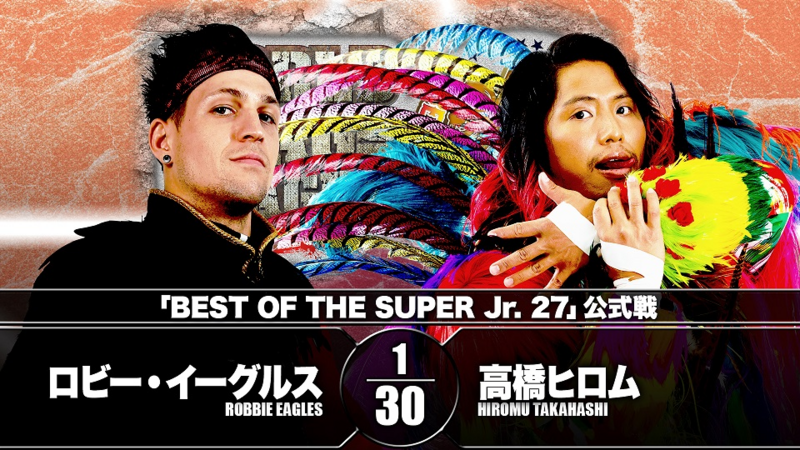 This wasn’t your run-of-the-mill BOSJ main event. There was some history. When Hiromu Takahashi made his big comeback at the end of 2019, it was thwarted in a tag match when Robbie Eagles shockingly pinned him. Hiromu was looking for revenge in the same building, the hallowed Korakuen Hall. There was also added pressure as a loss for Eagles would eliminate him from the tournament. Meanwhile, a win for Hiromu would keep him at the top of the block. They got off to the expected start of a fast-paced standoff but it felt natural and not at all forced. That’s always important. At no point did this get boring despite the 26:01 runtime. Little things like Hiromu mocking him with chants were good, while you could feel the desperation in everything done by Eagles. The legs were the focus as Eagles looked to set up his Ron Miller Special finisher. That came into play when Hiromu went for his sunset flip bomb and his leg gave way. Beautiful stuff. Eagles gave it his all but fell to the Time Bomb in an incredible match that showcased how good Eagles it. [****½] 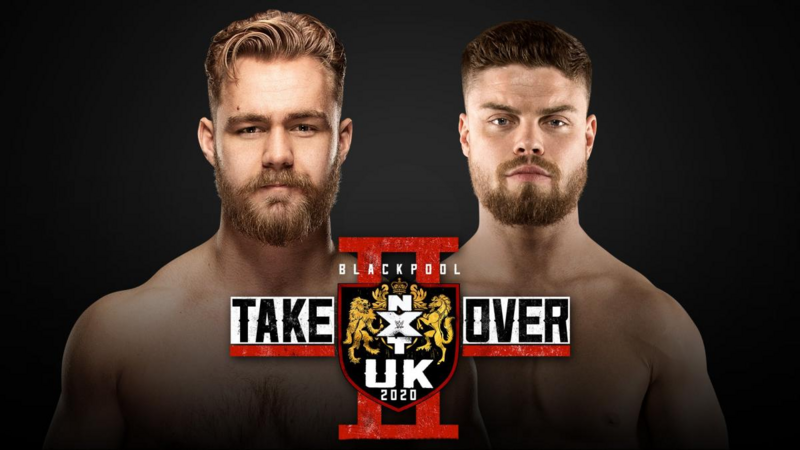 Pumped for this because they’re two of the best wrestlers on the roster. Right from the start, this was simply about proving who the best wrestler on the brand is. Devlin had Bate well scouted, blocking Bop and Bang in the opening minutes. The target became Bate’s midsection. He risked it on a plancha that worked but then went too high risk again and came crashing down on Devlin’s knees. Devlin honed in on that body part. I loved the game of tit-for-tat they played. For example, after Bate landed on Devlin’s knees, his next shooting star press attempt saw him fake out Devlin, who indeed got his knees up. He added more offense before hitting it, learning from his mistakes. Then, it progressed to something more heated and the slugfest was fantastic. The fans ate it all up. Devlin not falling for Bop and hitting his own Bang was a great spot. The late exchange that led to the Tyler Driver ’97 featured one of the best near falls I can remember. Bate immediately hit the Spiral Tap in frantic fashion to win in 22:23. Another tremendous match. The exchanges they had were ridiculous and the battle of trying to constantly one up each other made for a compelling story. Phenomenal stuff. [****½] 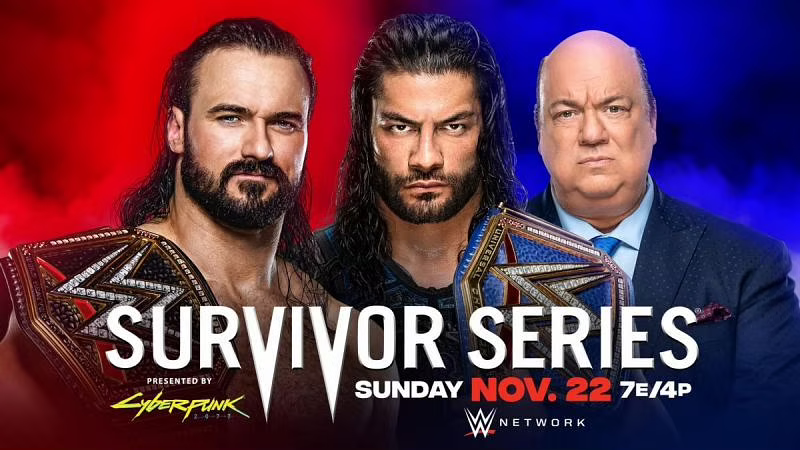 Their WrestleMania 35 match disappointed but both guys are doing way better in 2020. Roman carried him with confidence here but Drew hit him in the mouth early and had him regrouping outside. Drew was in his head, at least somewhat. Of course, Roman got going and was his vicious self. However, that’s different against Drew than it is against Jey Uso. Drew can dish it back and they had a hard-hitting, heavy-handed match. Jey was surviving against Roman, Drew was a legitimate threat, evidenced by the Future Shock near fall. Drew’s submission close call was also good. I did chuckle when Roman did a Samoan Drop onto the table. Drew is Lana. Both guys survived each other’s finishers. A ref bump on a Claymore allowed Jey Uso to run out and get involved. That opened the door for Roman to get going and make Drew pass out to the guillotine in 24:51. That was fantastic. The screwy finish even made sense here. This felt like a big fight even with it being a non-title situation. [****½]