I can’t believe this is my sixth year doing this list. 2020 was certainly the most unique of them all, as the pandemic made it so wrestling looked different than it ever had before. Still, there were a lot of matches to love. I watched nearly every show put on by the three major companies other than some episodes of AEW Dark, WWE Main Event, and NJPW’s “Road to” shows.

It looks like between the three promotions, I had 107 matches rated at ****. So, I’ll post the honorable mentions before getting into the official list. Since 2020 was so hectic and work picked up, some of the entries will just be my original reviews of the match instead of entirely new write-ups. Hopefully, this list can remind you or let you know about some great matches from a year that was difficult.

Honorable Mentions (Matches that got **** but didn’t make the list) 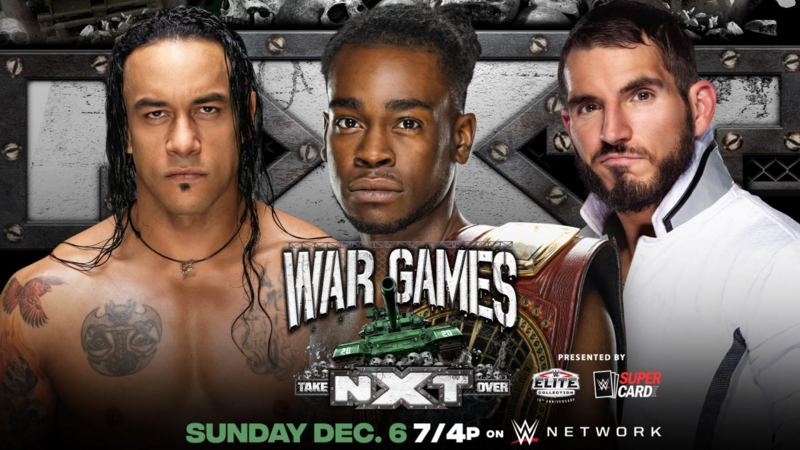 The idea to put the NXT North American Title on Leon Ruff came as a shock to pretty much everyone. It continued the theme of Johnny Gargano losing his championships in quick succession. Damian Priest was also an interesting part of the program, as he treated Ruff like a joke but his main focus was Gargano. Together, the three of them put on a hell of a show at TakeOver: War Games and nearly managed to steal the show. Their match moved along with a brisk pace and didn’t let up for the entire 17:28. Ruff showed that he belonged with the top stars, while Priest and Gargano continued to display their tremendous chemistry together. The only real issue with this match was the finish. Having so many people in Ghostface costumes come out felt like overkill and the reveal of Austin Theory was pretty lame. Gargano used his cunningness to pin Ruff and secure his record-setting third North American Title reign, which has already surpassed one successful defense. [****] 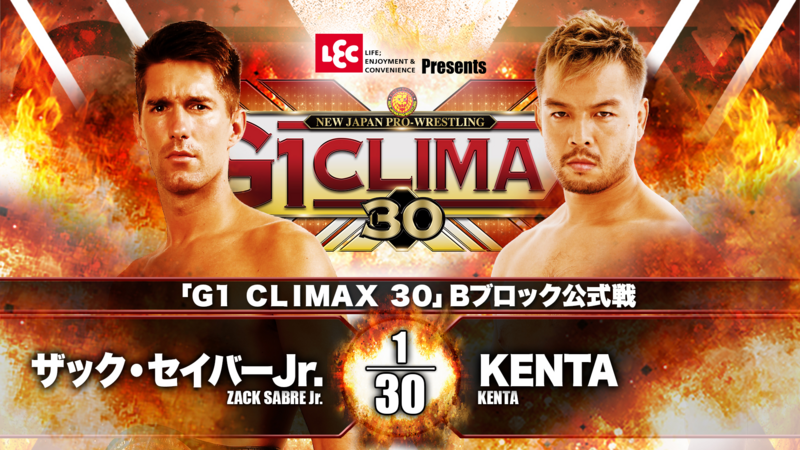 Their G1 29 meeting, which Zack won, was an underrated gem from last year. It was interesting here with both men being heels this go around. It followed a formula I’m used to when ZSJ fights Ibushi, at least at the start. He tried to trap KENTA in submissions, only to get slapped around for his efforts. I think things like Zack grabbing at a kick to wrap it up in a hold are always good and it worked here. Zack played the de facto babyface because KENTA is such a dick and he’s so good at it. Sabre would do his best to give it back to KENTA, only to get floored because he was out of his element and overmatched in that situation. There was something pretty great about the back and forth nature of this, which each guy trying to play to his strength. Eventually, KENTA hit the Go to Sleep to win in 15:46 and I really enjoyed that. A hell of a match that is just what I look for in the G1. [****] 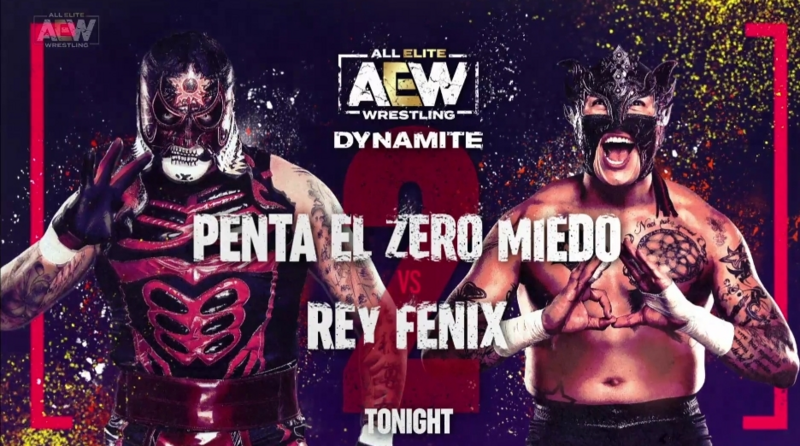 For most of 2020, I noted that AEW was doing a disservice to The Lucha Bros (and Santana and Ortiz for that matter). They had one of the best tag teams on the planet and made them a .500 duo who was an afterthought. After they put on a stellar match in October during the Eliminator Tournament, it seemed like the company finally realized what they had. A highly-anticipated rematch was signed for this night and it headlined the show. Though it only went 12:24, they managed to pack a ton of action and highlights into this. However, it also had bigger storytelling elements. Both brothers ripped at each other’s masks and Penta was especially vicious throughout, hitting three piledriver variations on his brother, who had a bad neck. It played a major part in the split that Eddie Kingston had tried to caused in them, which was added to when PAC made his return after the match. Easily one of the better main events in Dynamite history and a great showcase for two of the best. [****] 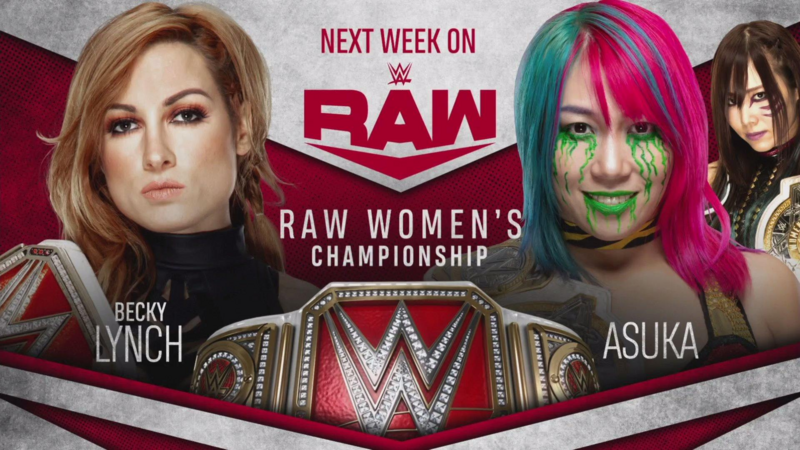 At the 2019 Royal Rumble, Becky Lynch and Asuka put on a classic that remains one of the best women’s matches in the history of the company. A year later, they went at it again at the Royal Rumble. While that one was good, it didn’t quite match the previous performance. Somewhere in the middle of those two lies this encounter from Raw a few weeks later. The two continued to put on a great showing with a back and forth battle that played into both of their characters, especially with Kairi Sane at ringside. The first two-thirds of this 18:51 encounter were strong but it’s the final third where this really stood out. Asuka and Lynch traded some of their best offense in quality exchanges that included a fantastic finishing stretch. The actual final move was quite unique as Lynch won with a modified uranage, which we hadn’t seen much from her. A great final leg to their trilogy before their emotional ending when Becky relinquished the title to her. [****] 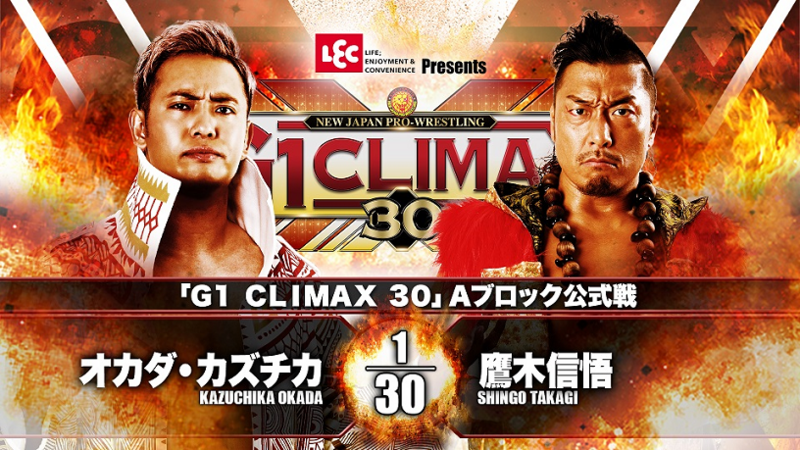 A first-time meeting that could’ve been great or it could’ve gone the way of the rest of Okada’s 2020 performances. Okada fans complained about how he hadn’t been his usual self in this G1 but this was classic Okada. The formula was back, baby! It was changed up a bit, especially in the finishing stretch, but the old days of overly long matches where the first two-thirds are pretty bland live on! It’s a recipe for very good matches but rarely for great ones. There were things I really liked that earned it a spot on the list, including the way it was paced later on and Shingo doing his own Rainmaker pose. That was awesome. The ending saw Okada finally win a match of importance with the Money Clip submission. Shingo didn’t submit, though, instead passing out from the lame move after 27:45. By no means a classic but a pretty great match that showed the Okada of old is still somewhere in there. Meanwhile, Shingo continued to be awesome and raised the level of a match that might not have worked as well with a different opponent. [****] 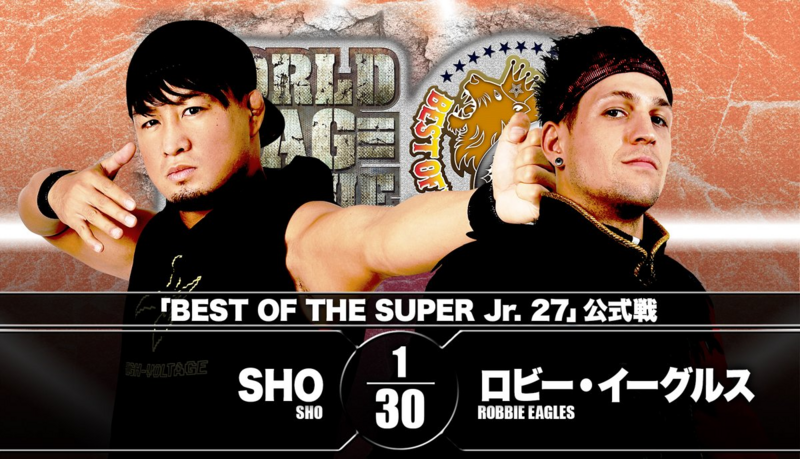 The field for the Best of the Super Juniors this year had a few standout names. Along with Hiromu Takahashi, Taiji Ishimori, and El Desperado, there were these two. Robbie Eagles is something of a technical wizard while SHO is a powerhouse in the division. Surprisingly, that wasn’t the exact story of this 19:22 match. Instead, it was more like speed against strength, with Eagles bringing the quickness. While this might not have totally lived up to my high hopes for it, this was still really good. I love when Eagles busts out the 450 splash onto someone’s leg to set up the Ron Miller Special. It didn’t work when he first attempted it but he got it right the second time and it led him to one of his biggest wins in a NJPW ring. It will totally go underrated in the grand scheme of things but deserves more shine from around the wrestling world. [****] 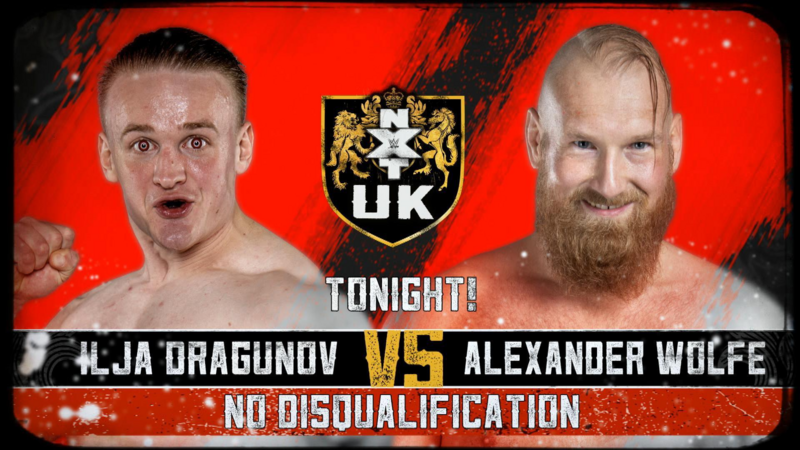 It seems like we’ve hit a point where the things that happen on NXT UK are basically ignored by most fans. However, the show has had its fair share of great matches. One of them happened right at the start of the year. The feud between Ilja Dragunov and Imperium was only just heating up as the calendar turned to 2020. Before Dragunov could get his hands on United Kingdom Champion WALTER, he had to deal with his henchmen. The one who most bothered him was Alexander Wolfe. That led to this No Disqualifications match, which featured 14:51 of brutal action. They didn’t overdo it with the stipulation but made sure to make it work. There was also a strong dynamic where they played up their history together. The outcome was never really in doubt as Dragunov was the one getting pushed but that didn’t stop this from being a hell of an encounter. [****] 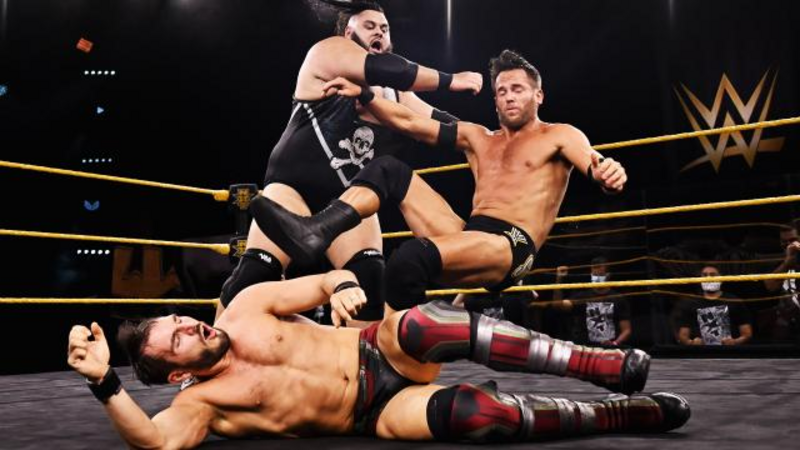 It was kind of hard to see this one coming. During the buildup to TakeOver XXX, a new North American Champion was needed due to Keith Lee relinquishing his gold. There was just no way to expect this triple threat match to be as good as it was. Right at the start, Bronson Reed proved to be a problem due to his sheer size. It caused Roderick Strong and Johnny Gargano to work together, even though they had a long history of disliking each other. They were even quick to turn on each other. Reed’s size turned out to actually be the thing the entire match was built around. They utilized it in clever ways and made sure this was entertaining for the entire 20:50. Strong and Gargano have been two of NXT’s top guys for a while but this felt like Reed’s coming out party. He was given the platform to shine brightest here and delivered. He also scored a huge win with a splash, earning his way into a TakeOver title shot. This was huge for Reed. [****] 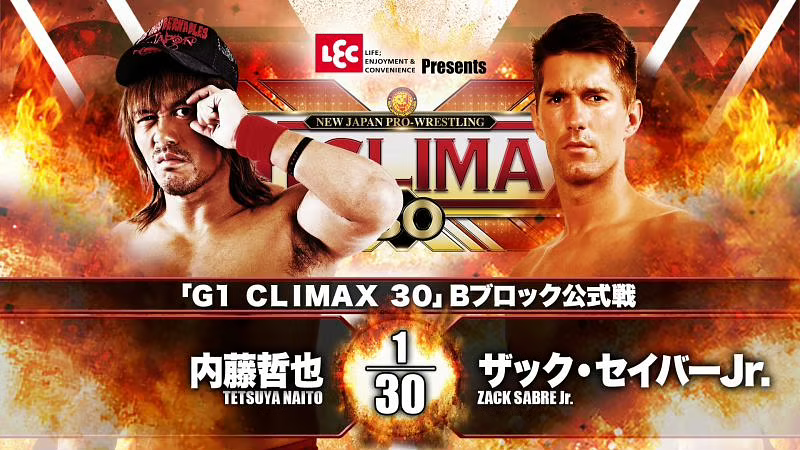 They entered this match at 2-2. Sabre Jr. made note that he was laser-focused on this encounter as a win over the champion would get him a title shot before Wrestle Kingdom 15. Surprisingly, Naito took to the mat with Sabre Jr. in the early portions and held his own. Normally, Zack dominates there and gets in trouble when he plays his opponent’s game. I do think that this suffered from the case of a slow start but it had the sense of building towards something where other matches seem to be filling time. It wasn’t a perfect start but it worked more than others. At times, it seemed like they were trying to tease the draw, which may have held things back in the first half or so. At other times, it felt like a well-thought out chess match. Once they threw out some tornado DDTs, you could feel things click and get going into the next gear. It closed hot and Naito eked out a win with Destino at 28:28. It felt like Naito was too broken down in last year’s G1, where he underperformed. The long break helped him rest up as his G1 was much better this time around. [****] 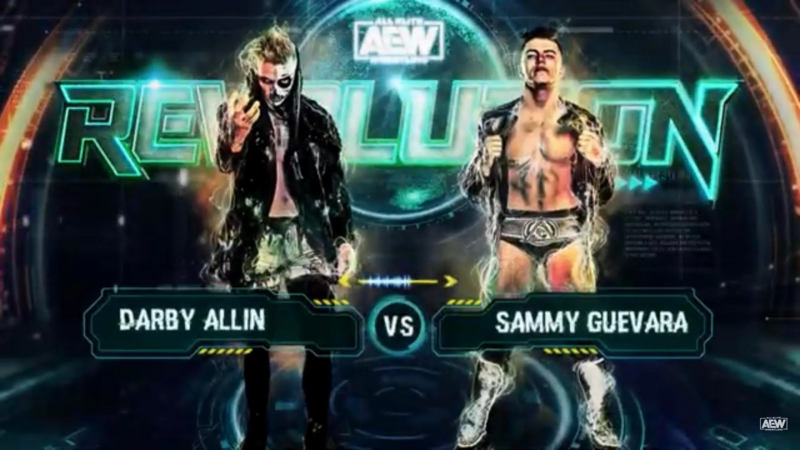 I absolutely adore a fantastic sprint and that’s just what I got here. This was the shortest match to ever make one of my lists, clocking in at a mere 4:58. For some background, I first saw these guys on FIP and Style Battle shows when I had FloSlam in 2017. Darby immediately hit Sammy with a tope suicida before the bell rang. They spent the next few minutes fighting outside before this officially got started. That included Darby mostly missing a dive to the guardrail and Sammy busting out a sick looking 630 splash through a table on the outside. They kept that insane pace up once the match got started despite having already taken a beating. This was two guys who were willing to put their bodies on the line to steal the show and you have to appreciate that. Allin scored the win with a Coffin Drop that the fans popped hard for. This was right up my alley. They packed a lot of action into a short time, it had the intensity it needed, and felt like they were out to make a statement. [****]