Hello 411 guys, gals, enbies, and everyone else! Welcome to 411’s WWE Royal Rumble 2020 preview! I’m Jeremy Thomas as always, and it’s time to take a look at the first WWE PPV of 2021 and, as they always say, “the start of the Road to WrestleMania.” The first PPV of 2021 has been a bit more under the radar than recent years, but there have been teases of a lot of potential surprises and WWE always gets extra-motivated starting with this show every year, so let’s cross our fingers and hope that it’s a good show. Anyway, let’s jump in and see what’s currently on tap, shall we? 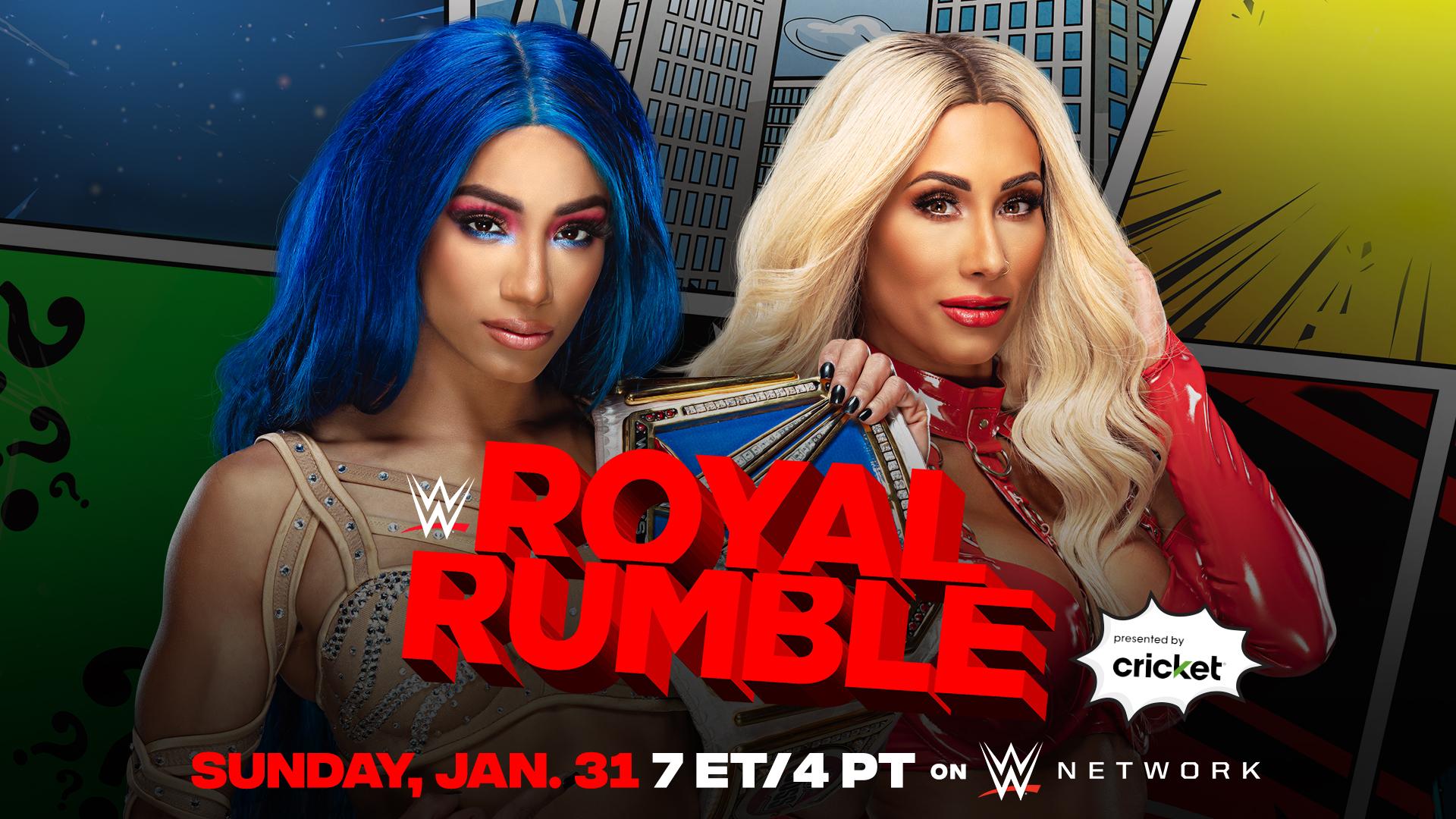 Sasha Banks and Carmella have been feuding over Banks’ title for a few months now, and the results have been…fine. Listen, I’m not the biggest Carmella fan out there but I appreciate what she brings to the division and I think the Untouchable gimmick has been good for her. But the best thing this feud has given us is Reginald the sommelier; the back and forth between the two women has been passable. They had an okay match at TLC, and I expect them to have an okay match here — nothing more, nothing less. I don’t see any real reason to take the title off of Banks right now, and this has pretty clearly been a holding feud for Banks until she gets to her WrestleMania opponent. I don’t see this going down any way except Banks beating Carmella cleanly on her way to a feud with the Royal Rumble winner (more on that in a bit), while Carmella moves on to something else. 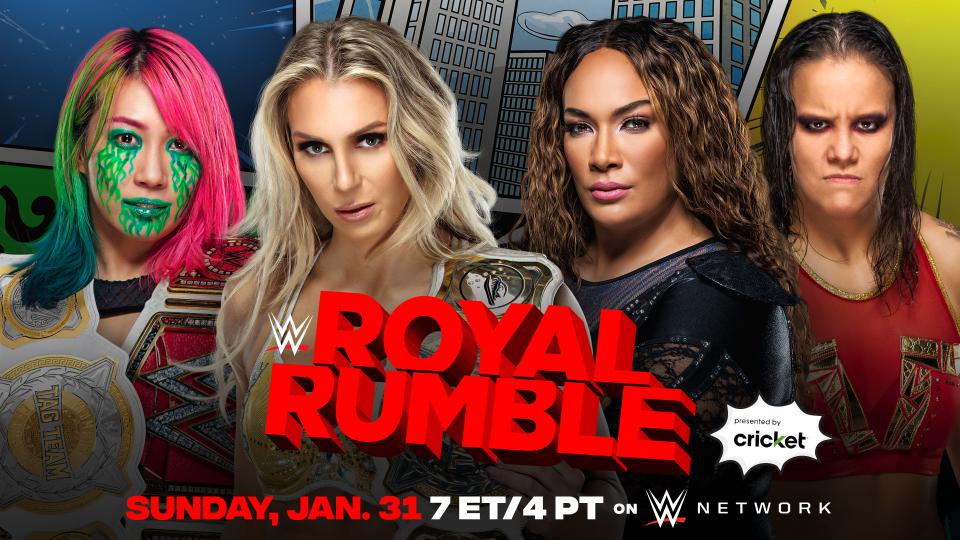 Jax and Baszler are back for a chance to win back the championships they lost to Flair and Asuka at TLC, and I couldn’t be milder. I like Baszler, but I don’t think anyone watching WWE right now can deny that her teaming with Jax isn’t really going nowhere. The conventional wisdom seems to be that Jax and Baszler win back the tag team titles in a way that sets Asuka and Flair against each other, leading to a match between the two for Asuka’s Raw Women’s Championship at WrestleMania. With Mandy Rose and Dana Brooke kind of waiting in the wings to potentially be Jax and Baszler’s title defense at WrestleMania, I can see it going down that way. Or I could, until the Ric Flair/Lacey Evans storyline started up. Now I’m less certain, because there has to be an endgame to that, and I don’t see how Evans’ ticket to Space Mountain factors into an Asuka vs. Flair match. Maybe they end up fighting for another month and Flair moves onto feuding Asuka after Elimination Chamber, which would suggest a possible tag title match at that PPV. Regardless, my gut tells me that Flair and Asuka continue on as champions here — which suits me fine. 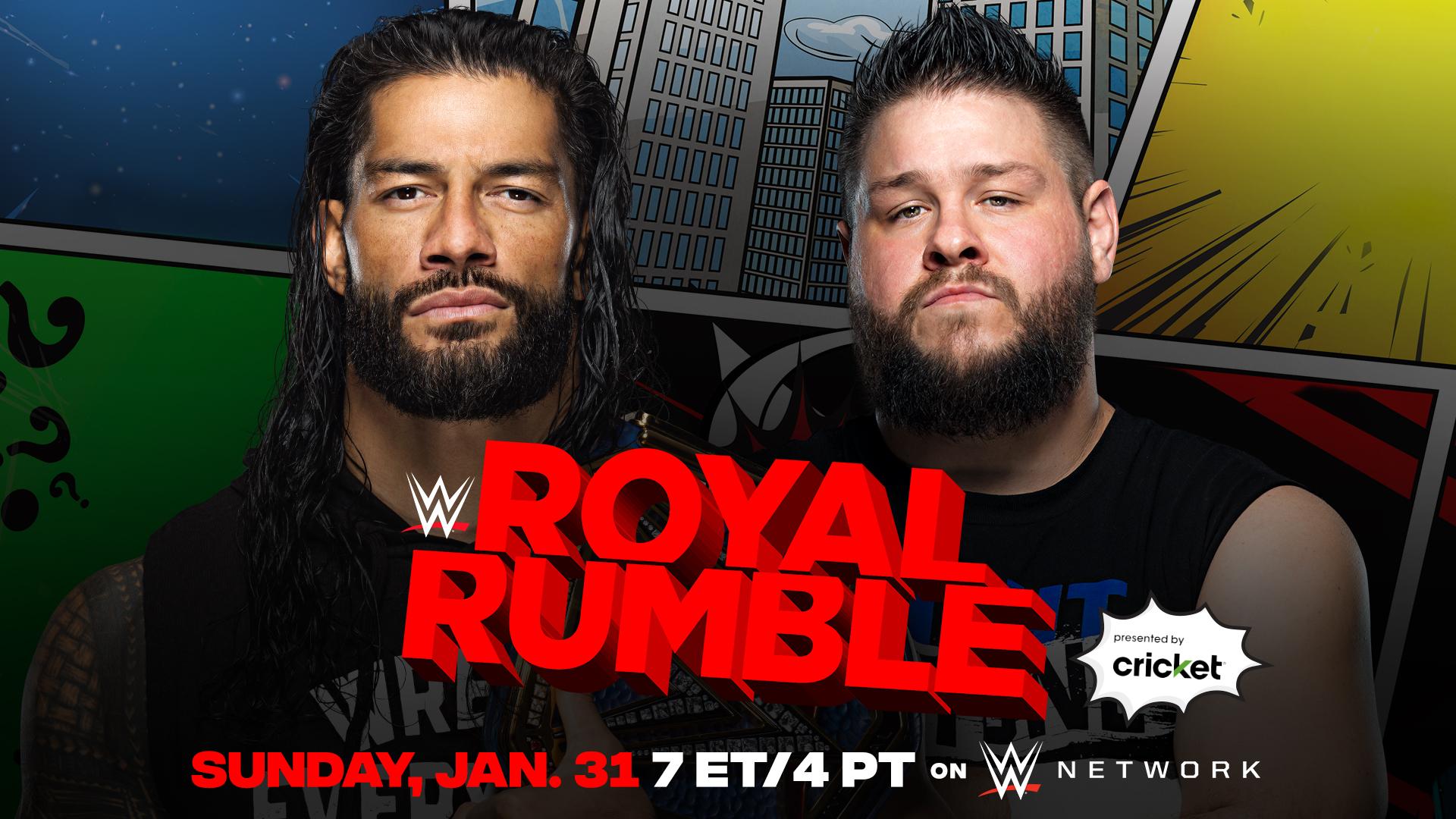 The Royal Rumble is often a place for holding pattern feuds as I’ve mentioned above. And while the Roman Reigns vs. Kevin Owens feud has been entertaining, it is absolutely a holdover while we wait to see who Reigns will face on the Road to WrestleMania. It’s hard to keep momentum going on a feud after the challenger loses multiple times, but Owens has been good enough in his role to keep fans behind him and the Adam Pearce bait-and-switch was remarkably well-done. A Last Man Standing match is exactly the kind of gimmick bout to blow this feud off and while it’s not my favorite match (too much start and stop to the match), Reigns and Owens should be able to wring something pretty entertaining out of this. There’s absolutely zero doubt on my part as to who is still champion by the time this ends, but I’ll enjoy it nonetheless. Goldberg sure is an interesting choice for Drew McIntyre’s opponent, eh? There’s been a lot of handwringing about Goldberg possibly being set to win the title and go on to face someone at WrestleMania, and I absolutely understand why. The WWE Hall of Famer is the kind of guy that the ‘E generally doesn’t bring in to do the job and putting him in one of his two matches of the year right before WrestleMania certainly would seem to be a setup for the second. The thing is, who does WWE really have to face Goldberg? I don’t imagine WWE feels Keith Lee is ready for a WrestleMania spot yet, and there really isn’t anyone else who could take Goldberg on. Maybe Brock Lesnar, but we’ve seen that match twice now and the most recent one should be the last one. My feeling is that McIntyre wins here and goes onto a feud with someone like Sheamus, which has been set up for a little while now. The only other possibility would be Goldberg winning and Miz cashing in to beat him afterward, leading to a Miz vs. McIntyre feud, but I’m going to lean McIntyre. I know that leaves us without a title change on the PPV, but that would not be a first time for the Rumble by any measure. 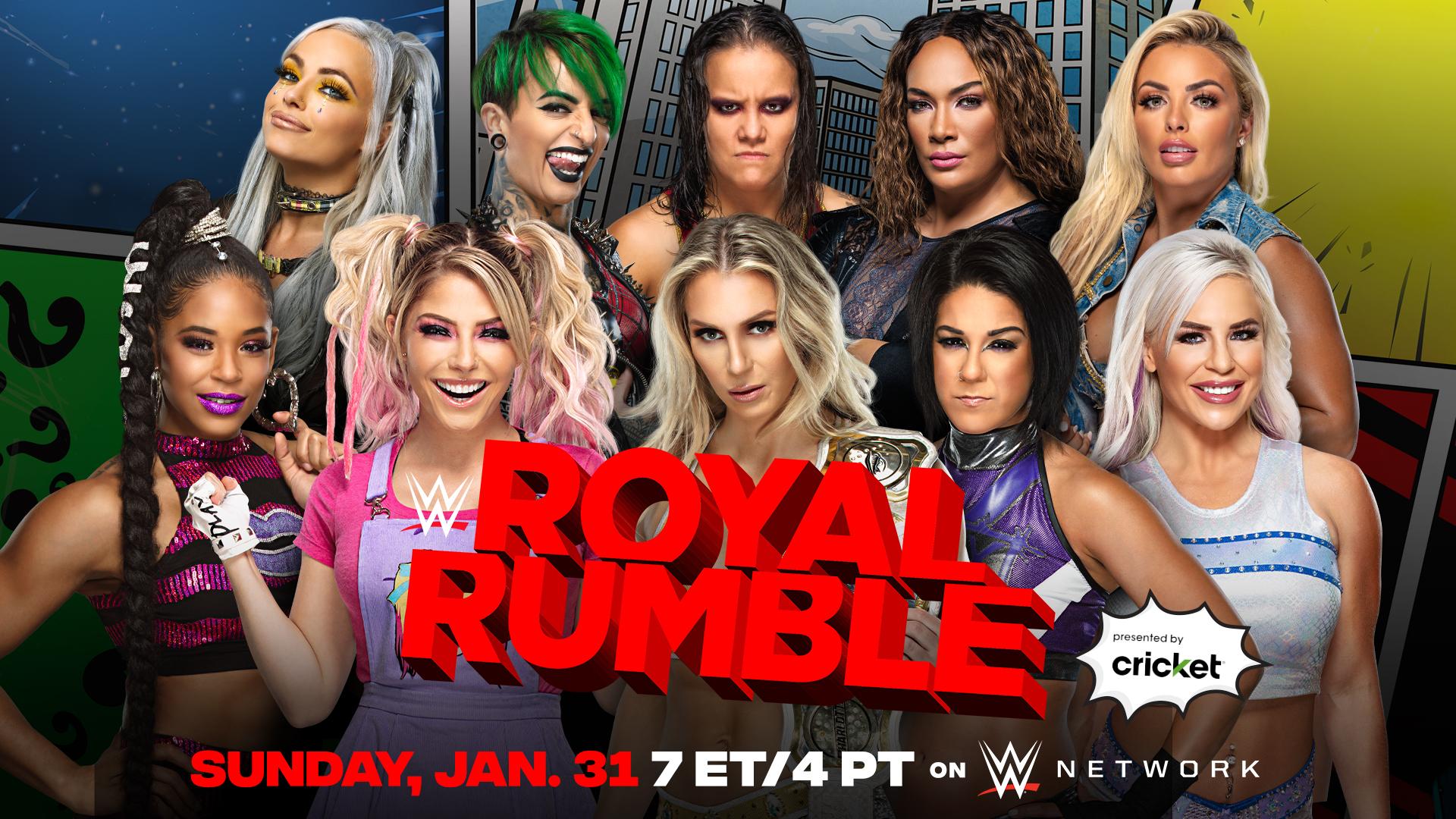 The Women’s Rumble has a lot of potential winners if you look through the current list of competitors. You have Charlotte Flair, Bianca Belair, Alexa Bliss, and Shayna Baszler all cued up with the potential to win it all, playing into their various storylines. Flair winning would set up that potential match with Asuka, a Belair vs. Banks match would be a big one for WrestleMania, Bliss’ Fiendess character would make sense to win, and Baszler going on to face Asuka with Nia Jax in her corner would present a major challenge to the champion. Whoever wins, I’m looking forward to this. The women’s Rumbles have generally been as entertaining as the men’s match and there are still a lot of open spots for them to bring in names like Io Shirai, Rhea Ripley, and Candice LeRae from NXT, old legends or even a big surprise like Taya Valkyrie. As much as my heart wants to saw Belair is winning this though, my proverbial money is on Bayley. Bayley has ever accolade to her name except a Royal Rumble win, and a rematch between Banks and Bayley seems to the obvious choice for a WrestleMania match. WWE could go with a Ronda Rousey appearance and win, but honestly if they don’t give this one to Bayley, I feel like they’re going to be missing out a bit. And that’s someone who desperately wants a Belair win. 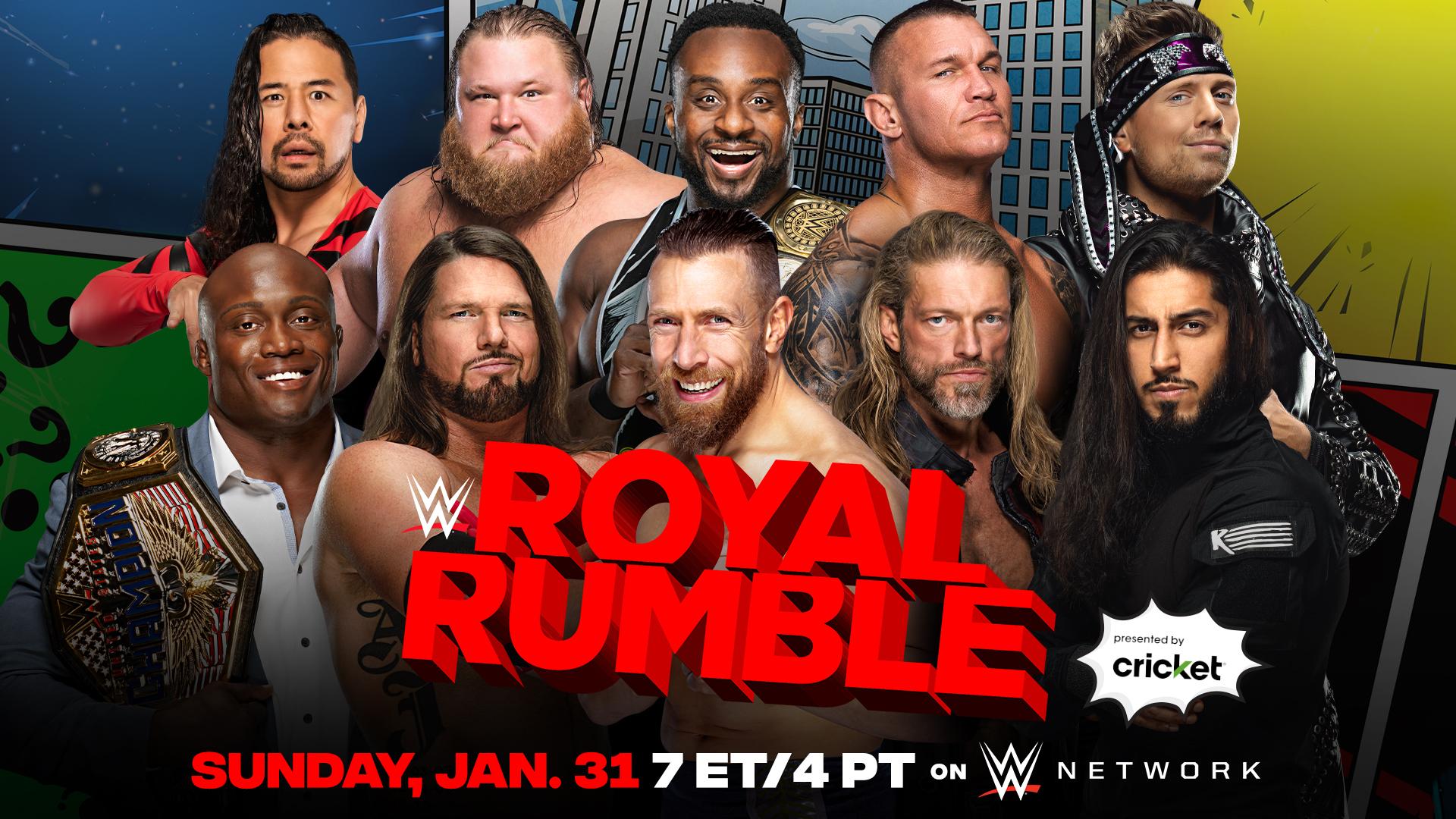 The men’s Royal Rumble is a stacked lineup as always, and like the women there are still plenty of open spots to bring in some shockers. We have Edge and Randy Orton starting off the Rumble (we know this thanks to WWE Backstage) and a whole host of talent set to follow. I am leaning toward the idea that the winner here will end up challenging Roman Reigns, as WWE seems to think that would be the bigger match. That eliminates most of the heels unless they have a babyface turn planned, and for my money brings it down to a few possibilities in Daniel Bryan, Shinsuke Nakamura, and Edge. With Randy Orton caught up in The Fiend right now, Edge may be freed up to get himself a World Title match at WrestleMania. Meanwhile, Bryan has been setting up the fact that he’s never won the Rumble before to get him a heartwarming story, while he’d also be a great physical underdog to Reigns. And Nakamura had his Universal Title shot robbed from him on Smackdown in a match that turned him babyface. I’d love to see any of these three win, but I still suspect Orton vs. Edge will be the WrestleMania bout with Orton handling the Fiend over the next month or two. And as great as a match between Reigns and Nakamura would be, I don’t think WWE wants Shinsuke main eventing again just yet. That puts on Bryan, which will give us a great feud heading into ‘Mania. Expect Braun Strowman to be treated like the big elimination machine this year and Edge to go the distance to make the final four, but ultimately Bryan pointing at the WrestleMania sign seems like the right call.

And that’s all we have for the Royal Rumble! As I mentioned before, this is always an event I look forward to thanks to the signature match and even a mediocre Rumble is still generally a good show. I have some hopes for this one, and WWE knows they will have to build to WrestleMania exceptionally strong this year so I’m hoping for some big things coming out of this one.

Anyway, thanks once again for reading, and remember that we will have live coverage of WWE Royal Rumble courtesy of the one and only Scott Slimmer, right here on 411mania.com. I’ve gotta run, my number is up and Brock Lesnar’s a-waiting, so please — pray for me.